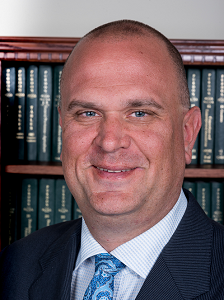 Larry W. Miller, Jr. is a partner with the Miller Law Group, PLLC in Reading, Pennsylvania. He received his Bachelors of Science from Greensboro College in North Carolina and his Juris Doctorate from the Villanova University School of Law.

Larry is the author of the book Success and is also a Professor of Law, having taught at the Lancaster County Association of Realtors as well as other institutions. He is currently a member of the Pennsylvania and Berks County Bar Associations and has served on the Rotary Club, Small Business Association, the Berks Elder Network, and the Berks County Chamber of Commerce. In addition, while serving on the Unauthorized Practice of Law Committee in 2002, Larry personally investigated many Living Trust scams and other illegal practices of law and reported his findings back to the committee. Larry’s investigations resulted in the prosecutions of several entities by the Attorney General and the elimination of several more illegal practices by others.

Larry has written for various magazines and newspapers, including Morgantown’s Tri-County Record and Today’s Reading Woman Magazine, and speaks at many organizations on subjects ranging from motivation to intellectual property law. He has been awarded the American Bankruptcy Institute, “Medal of Excellence,” as well as the “Business Person of the Month” by the ABWA. He has been featured on many local television and radio programs, including the Channel 69 News (Berks Edition), a frequent guest on Comcast Tonight, WEEU 830 AM Radio’s Feedback Live, the talk show Berks County Tonight, and his career has been featured in the Reading Eagle’s Sunday Lifestyle Section.

Larry’s areas of practice include Estate Planning, Business Law, Real Estate Law, Contracts, Trademarks, and others. He has been very active within the community, raising money for charitable institutions, delivering for Meals on Wheels, and offering Pro Bono services to those in need. He has been a spokesperson for the Meals on Wheels program, having appeared in television, radio, and billboard ads to promote volunteerism.

Business Person of the Month, ABWA